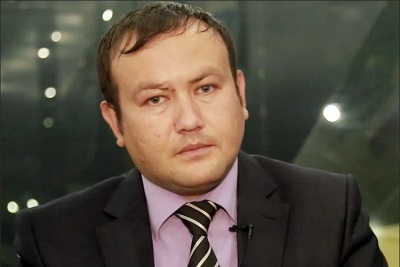 On October 29, 2020, Andrei Viktorovich Kubatin, an outstanding representative of the younger generation of Turkologists of Uzbekistan, passed away from Covid-19.

Kubatin, a senior researcher in the National Center of Archaeology of the Uzbekistan Academy of Sciences and an Associate Professor at the Institute of Oriental Studies in Tashkent, was an extraordinary scholar who was already taking his place among the leading specialists in the medieval history of the Turkic peoples.

Born in Uzbekistan, of Russian and Azerbaijani origin, he was a native speaker of Russian and Uzbek and was fluent in all the Turkic languages of Central Asia as well as in Turkish. He was also a specialist in Soghdian, in particular the Soghdian inscriptions on coins from the Western Türk Qaghanate. He studied at the Al-Biruni Institute of the Academy of Sciences of Uzbekistan (Tashkent), where he wrote his thesis, Sistema titulov v Tiurkskom kaganate (2009), which was subsequently published as Sistema titulov v Tiurkskom kaganate: genezis i preemstvennost’ (Tashkent: Yangi Nashr, 2016), an exhaustive study of Old Türk titles and the offices they represented, based on a wide range of sources, meticulously examined and explicated. Any study of the administrative structure of the Türk Qaghanate and of its successor states and polities must take this work into account. It is a significant and lasting contribution to Turkic and Central Asian Studies.

Kubatin was the author of more than ninety studies, a number of them in co-authorship with Ghaybullah Babayarov, in Russian, Uzbek, Turkish and several in English largely dealing with the numismatic legacy of the Western Türk Qaghanate, but some also taking up broad questions of Turkology and Central Asian history, e.g. Sumerian-Turkic parallels, the etymology of the ethnonym Türk, the history of the Turkic peoples as reflected in the works of al-Bīrūnī and Maḥmūd al-Kāshgharī, the early medieval dialect of Soghdian as reflected in numismatic materials from Chach (modern Tashkent), Byzantine influences on the iconography of Western Türk coinage, Turkic Runiform writings found in Uzbekistan, Old Turkic terminology relating to urban structures, Old Turkic terms in the Türko-Soghdan documents from Dunhuang (currently in press) and numerous studies of specific Old Turkic titles. These studies appeared in a variety of journals and conference papers published in Uzbekistan, Turkey and Europe. There are at least three more articles currently in press.

Kubatin’s career took an unexpected and tragic turn in December, 2017. He was accused of “high treason,” of betraying his country by spreading Pan-Turkist propaganda, enflaming inter-ethnic hostility and passing on secret information about the geological resources of Uzbekistan to a Turkish scholar, who represented Turkey in Turkish-Uzbek scholarly exchanges. He was rapidly found guilty, sentenced to eleven years in prison, later reduced to five years. The charges were completely baseless and immediately aroused a storm of protest from the international Turkic Studies community. A letter from leading Turkologists around the globe was sent to the Ombudsman of Uzbekistan and then to the President of Uzbekistan Shavkat M. Mirziyoyev. An account of Kubatin’s travails was made known to the members of CESS and a statement of concern was issued on its behalf on March 14, 2019. Human Rights Watch also became interested in this clear miscarriage of justice.

After unceasing efforts from his family and colleagues around the world, along with evidence demonstrating that the charges were fabrications, Kubatin was released from prison in September, 2019 and declared innocent of all charges in what was clearly a manufactured case. His “rehabilitation” was made known in news and social media in Uzbekistan and elsewhere. During the course of his imprisonment, Kubatin was systematically subjected to physical and psychological abuse (threats were made that his wife, Feruza, would be raped and their son, Elbarskhan, killed). His health was seriously undermined. These tribulations undoubtedly played a role in his succumbing to Covid-19.

I never met Andrei personally. We were in email contact and several of his articles (including one now in press) were published in journals with which I am involved. I have the highest regard for his meticulous scholarship. I remain in shock from this tragic end to a young life that had already contributed so much to scholarship. I can only offer my deepest condolences to his wife and sister, both of whom I came to know during the course of his ordeal, and to his young son, Elbarskhan, who is still wondering where his father is.