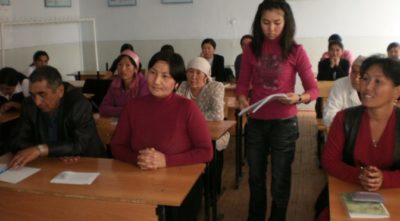 A new post is available at The CESS blog by Arzuu Sheranova of Corvinus University of Budapest, Conflict Prevention and Peacebuilding by International Organizations and the Government in Kyrgyzstan

Since 2010, international organizations (IOs) in Kyrgyzstan have been working together with the Government of the Kyrgyz Republic (KR) to achieve sustainable peace and development of the country. International organizations conduct parallel work at the community and national levels, where they help and advise the government in creating a roadmap for the country’s development and raise questions about necessary reforms. In turn, the Kyrgyz government is open to international recommendations and strongly supports cooperation with them. Notwithstanding the efforts of rebuilding infrastructure undertaken by the State Directorate for the Reconstruction and Development of Osh and Jalal-Abad, government measures for peacebuilding and conflict prevention were more technical and institutional in nature, as for example state institutions were organised and reorganised and new concepts were adopted since 2010.

The work directly at the community level after the events of 2010 was mainly carried out as part of projects and grants of international organizations and agencies, such as the United States Agency for International Development (USAID), the European Union (EU), the Organization for Security and Cooperation in Europe (OSCE) and the United Nations (UN), which can be divided into three categories.