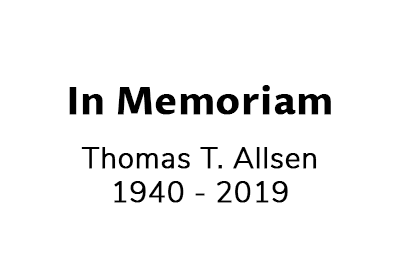 Thomas T. Allsen (1940-2019) was one of the most outstanding scholars of the history and culture of Medieval Eurasia and of the Mongol Empire in particular. His books and articles are cited in virtually every work that deals with the peoples of that time and place. Allsen did much to reorient “Mongol Imperial Studies” from a largely political narrative to one that encompassed aspects of ideological, commercial and material culture and the transfer of cultures across Eurasia. His excellent knowledge of Chinese, Persian, Arabic, Russian and Western European languages, his thorough command of the sources dealing with the peoples of Eurasia and jargon-free style of exposition made his work essential reading for scholars in the field, scholars working in World history and at the same time open to broader audiences.

Allsen received a B.A. in History from Portland State University in 1962, an M.A. in Russian Studies from the University of Washington in 1964, an M.L.S. in Librarianship in 1969 from the University of Oregon and his PhD in 1979 from the University of Minnesota. After briefly teaching at Western Kentucky University (1979-1980), he spent the remainder of his teaching career (1980-2002) in the History Department of Trenton State College, now The College of New Jersey, where he attained the rank of Professor. Allsen’s work was recognized worldwide. He won numerous awards including fellowships from the prestigious National Endowment for the Humanities (1998-1999, 2003-2004) and from the Guggenheim Foundation (2002-2003) in the field of East Asian Studies.

These awards invariably resulted in outstanding, path-breaking books: Mongol Imperialism. The Policies of the Grand Qan Möngke in China, Russia and the Islamic Lands, 1251-1259 (1987), Commodity and Exchange in the Mongol Empire. A Cultural History of Islamic Textiles (1997), Culture and Conquest in Mongol Eurasia (2001), The Royal Hunt in Eurasian History (2006), The Steppe and the Sea: Pearls in the Mongol Empire (scheduled to appear in April, 2019).

He was the author of numerous articles and chapters in books, including his “The Rise of the Mongolian empire and Mongolian rule in north China” in The Cambridge History of China, vol. 6. Alien Regimes and Border States, edited by Herbert Franke and Denis Twitchett (1994), pp. 321-413, a monograph in itself. His studies “Two Cultural Brokers of Medieval Eurasia: Bolad Aqa and Marco Polo” in Nomadic Diplomacy, Destruction and Religion from the Pacific to the Adriatic. Papers prepared for the Central and Inner Asian Seminar, University of Toronto, 1992-1993, edited by Michael Gervers and Wayne Schlepp, Toronto Studies in Central and Inner Asia, No. 1 (Toronto: Joint Centre for Asia Pacific Studies, 1994), pp. 63-87 and “Technician Transfers in the Mongolian Empire,” The Central Eurasian Studies Lectures, 2, edited by Daniel Prior, Department of Central Eurasian Studies, Indiana University (Bloomington, Indiana, 2002), were landmarks in the field. For many years he was one of the editors of Archivum Eurasiae Medii Aevi (1986-2013).

A Festschrift in his honor was published in that journal in vol. 21 (2014-2015), marking his 75th birthday. Allsen gave willingly and generously of his time, broad erudition and sage counsel to an extensive range of scholars, from novices to aging veterans, as the “Acknowledgements” section of many books and articles attest. His impact on Central Eurasian Studies will continue for many years to come.