Presence is Dominance: The History of Semipalatinsk Nuclear Test Site and Russia’s Influence in Post-Soviet Space 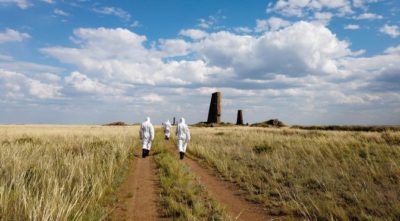 A new post is available at The CESS blog by Sara O’Connor of University of California Irvine, Presence is Dominance: The History of Semipalatinsk Nuclear Test Site and Russia’s Influence in Post-Soviet Space

A Brief History of the Semipalatinsk Nuclear Test Site (SNTS)

The Semipalatinsk Nuclear Test Site was built by Kazakh prisoners as commissioned by Joseph Stalin from 1947 to 1949 near a town formerly known as Alash kala[i] and presently as Semey. The SNTS was a vast eighteen thousand square kilometers and was the site of 456 known nuclear weapons tests between its opening and its closure in 1991. Prior to being the home of the most active Soviet nuclear test site, Alash kala and its neighboring city of Karaganda were the home of a burgeoning literary and academic scene due to its role as a destination for Soviet exiles. Dostoevsky’s literary career  started during his time in Semipalatinsk, and its people are featured in Crime and Punishment.  The area is also well known as a native land of Abay Kunanbay uly, father of modern Kazakh poetry.

The climate has a dramatic range between -40 degrees Celsius in the winter and can reach over one-hundred degrees Fahrenheit (38 degrees Celsius) in the summer. In the aftermath of the nuclear tests and the closure of the site, Russian scientists declared that they did not follow protocols to bury and protect nuclear material as they could not imagine that anyone would be in the area (Harrell & Hoffman, 2013). Yet it is difficult to imagine that the placement of this project which they wanted out of sight was coincidentally neighboring the village where political dissidents had been sent, and its remoteness circumspect as it has been determined that over 1.3 million people were impacted by the nuclear tests conducted at SNTS (Harrell & Hoffman, 2013).