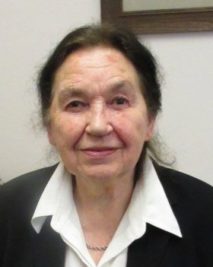 Ilse Apa (or Opa in Uzbek) was one of less than a handful of scholars who introduced Central Asian studies to Western scholarship. During the Cold War, when no one paid any attention to Soviet Central Asia, Dr. Ilse Cirtautas began her tireless efforts to make sure Central Asian societies and their literature and culture were recognized and appreciated. Uzbek, Kyrgyz, Kazakh, Uighur, and Tajik students and scholars called her Ilse Opa, Ilse Xonim or Ilse Apa, showing enormous respect for her mentorship and her dedication for generating interest and strengthening scholarship in the fields of Central Asian languages and literatures.

In the United States she taught first at Indiana University-Bloomington (1965-1968) and then moved to the University of Washington in Seattle in 1968. UW was fortunate to have her to develop Near Eastern Languages and Civilization (NELC) into a center for Turkic languages, literature, and culture beginning in 1984 until her retirement in 2015. During her half-century long work in Comparative Turkic Languages and Literature (Turkology), Ilse Opa educated countless number of students, including those who learned several Central Asian languages in the summer classes she created. Many of the leading Central Asian specialists in the United States learned a language in one of those summer classes. She founded the Central Asian Studies Group (Central – Inner Asian Studies Seminar) in 1987. Her scholarship on Uzbek literature was groundbreaking with two books she published in the 1980s, Chrestomathy of Modern Literary Uzbek, and Märchen der Usbeken: Samarkand, Buchara, Taschkent, but Ilse Opa contributed to the recognition of Kazakh and Kyrgyz literatures in English as well with her support for student-lead newsletter, the Kazakh & Kirghiz Studies Bulletin, and the Journal of Central and Inner Asian Dialogue.

Since 1988, Dr. Cirtautas organized an annual Nicholas Poppe Symposium on Central/Inner Asian Studies to advance the field single-handedly. Her mentorship of students and scholars both in the USA and Central Asia expanded into her tireless efforts to educate politicians and the general public as well. Her perseverance led to the establishment of the Seattle- Tashkent Sister City Association in 1972.

Ilse Cirtautas retired from the NELC in 2015, and in 2017 at the 18th Annual CESS Conference hosted by the University of Washington’s Ellison Center for Russian, East European and Central Asia Studies her scholarship, teaching, and service were recognized in a special panel organized by Dr. Talant Mawkanuli. Students who win the graduate and undergraduate travel fellowship that Ilse Apa established will keep her legacy alive in the future.