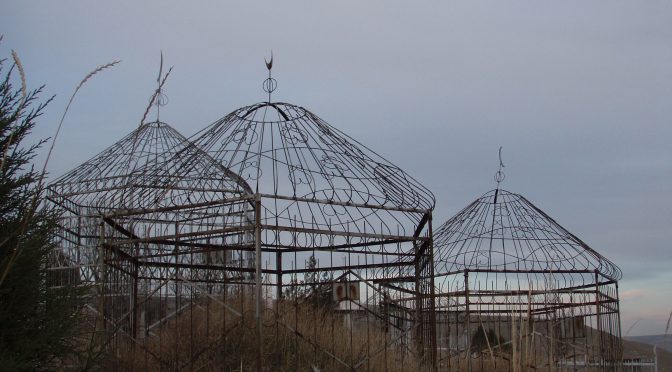 A new post is live at The CESS blog by Maria Louw of Aarhus University, Aging in the Absence of the Young and in the Presence of the Ancestor Spirits

In this blog post I will present a research project I am currently engaged in and reflect on some of my preliminary findings. The project is part of a larger cross-disciplinary project, “Radical Uncertainty and the Search for a Good (Old) Life”[1], in which artists, philosophers and anthropologists explore how people who are aging under challenging and uncertain life conditions strive to achieve good lives. My own anthropological part of the project takes me to Kyrgyzstan and focuses on Kyrgyz people who grow old in the absence of their close families. One of the themes that has appeared as central is the role of the ancestor spirits in the lives of the elderly.

A bed for Gulbara’s husband

Gulbara’s husband, as it showed up, had died many years ago, as had most of the other people she had cared about during her life. But Gulbara was not alone. The spirits of those who had died would often dwell in her house. They would come to her in her dreams, giving her omens, as ancestor spirits sometimes do, but more often they would just come and be there. Take a nap and leave again. When she was ill, they would encourage her to persevere: “eat well”, “rest well”, they would say. They would drink tea and ask how she was doing. “I live with them,” she said and shrugged her shoulders as if there was not much to say.

Gulbara[2] point points in the direction of the kitchen. She explains that she recently put up a bed there, as this is the place her husband usually lies down to take a rest when he visits her. Previously, he used to lie down on the floor, but she wanted to make things a bit nicer for him.