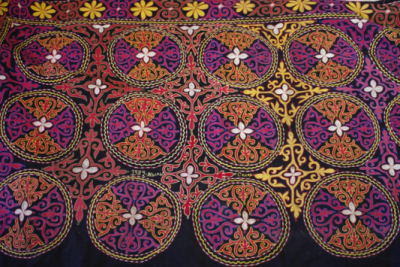 A new post is up at The CESS Blog by Guldana Salimja of the University of British Columbia: The Afterlives of Yurt Wall-hangings: Tus Kiiz.

Ölgii, the capital city of Bayan-Ölgii Province, is a small city that one can stroll all over in just an afternoon. Since falconry’s title of cultural heritage was affirmed by UNESCO, the concept of heritage has been widely accepted by locals. Just as falconry became a vital connection to the Kazakh historical past, natural environment, and traditional culture across Eurasia, handicrafts have also allowed Kazakhs to maintain their identity and traditional knowledge as an ethnic minority in Mongolia, and have become an attribute of “authentic” Kazakhness. While Kazakh men take up the iconic image and profit from falconry as part of ethnic tourism and international spectacle, women have quietly become the backbone of a local informal economy, clearly represented by traditional handicraft production.