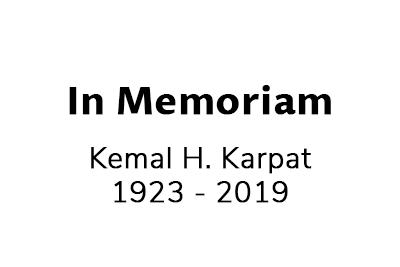 It is with a heavy heart that I share news of the death of Professor Kemal H. Karpat. He passed away in Madison, Wisconsin on February 20, just five days after turning 96. Despite his advanced age, Professor Karpat’s death was sudden and unexpected. As was the case throughout his long academic career, in the days prior to his death he actively was engaged in research.
Kemal Haşim Karpat was born in the village of Armutlu in the Dobruja region of Romania on February 15, 1923. Descending from Crimean Tatar immigrants, Karpat was proud of his heritage and frequently returned to his family’s roots in his scholarship. In the midst of World War II, he left Romania for Turkey where he ultimately entered Istanbul University Law School, graduating in 1947. While in law school, he also received Turkish citizenship.

Always interested in new challenges and adventures, Karpat moved to the United States to study political science at the University of Washington in Seattle. Upon completing his master’s degree, he pursued his doctorate at New York University where he also worked in the United Nations Economic and Social Council for the Turkish delegation. In 1957, he completed his PhD in political science and took his first teaching job at Montana State University. He enjoyed recounting how as a Crimean Tatar born in Romania with Turkish citizenship his first class at MSU was teaching American Constitution. Two years later he published Turkey’s Politics, an extended version of his dissertation in which he emphasized the continuity between the late Ottoman era and Republican Turkey, a theme he revisited throughout his career. He returned to NYU in 1962 as an associate professor.

In 1967 he settled permanently in the History Department at the University of Wisconsin-Madison. He recalled that he was drawn to the UW to develop a Middle East studies program because many of the department’s members were the leading scholars in their fields like George Mosse, Jan Vansina, and David Cronon, among others. He said that their excellence pushed him to be a better scholar. Additionally, during his initial visit to campus he took a drive in the countryside outside of Madison and found the landscape reminiscent of the lands of his childhood in Dobruja. He had found his home. At Wisconsin Karpat mentored over two dozen PhD students, hosted countless conferences, was named a Distinguished Professor (1979), published the International Journal of Turkish Studies (1980-), developed the Central Asian Studies program (1989), and founded the Center for Turkish Studies (2001). To ensure the study of Ottoman history at the UW, he personally provided financial support for the Kemal H. Karpat Professorship in Ottoman History.

As a teacher, Karpat was demanding of his students, always pushing for further research, and encouraging the acquisition of new languages. Over meals with graduate students at his home he repeatedly told them that he always regretted in graduate school that his professors did not push him to become the best scholar possible, so he felt obliged to avoid this mistake with his own students. His undergraduate classes in Ottoman and modern Middle East history were always at capacity. He kept students rapt with his engaging lecture style and his often humorous storytelling.

Professor Karpat was known to most as a scholar, authoring or editing over two dozen books and over one hundred articles. Among his many works are Inquiry into the Social Foundations of Nationalism in the Ottoman State (1973), The Gecekondu: Rural Migration and Urbanization (1976), Ottoman Population, 1830–1914: Demographics and Social Characteristics (1985), and The Politicization of Islam: Reconstructing Identity, State, Faith, and Community in the Late Ottoman State (2001), all of which had major impacts in their field.

With his retirement from the University of Wisconsin in 2004, he was free to travel more often, but when in Madison he continued to go to his office every day, do research, write, and meet with students. He frequently said that his scholarly production and demands for speaking engagements were greater in his retirement years than ever before. Despite this, he always made sure that no matter how much he traveled, his gardens in Madison and at his home in Quogue, New York were blooming in the spring.