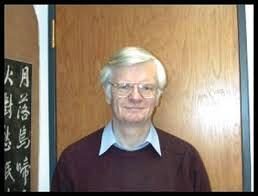 Professor David Orrin Morgan passed away on October 23, 2019 due to endocarditis and multiple organ failure after aortic valve replacement and a coronary bypass graft two days prior. Although his death at age 74 was far too early, he left an enduring legacy through his family, scholarship, and the students he mentored.

Best known as the author of The Mongols (1986, 2007 2nd edition), David Morgan earned his Bachelor’s degree at Oxford University (1966) and his Ph. D. at the University of London (1977) with his dissertation titled “Aspects of Mongol Rule in Persia”, supervised by Dr. Ann K. S. Lambton.  He also earned a Postgraduate Certification in Education from the University of London and served as a History Master at the Watford Grammar School from 1967-70 before entering a career in higher education. While studying at the University of London, he also became a Fellow at the British Institute of Persian Studies in Tehran from 1973-74.   After completing his Ph. D., he began his professional career at the School of Oriental and African Studies (SOAS) at the University of London where he remained until 1999, with a brief absence which he spent at Dartmouth (1997-1998) as a visiting professor.  His time at Dartmouth convinced him and his family that living amongst the colonials across the pond was acceptable. Thus, when the University of Wisconsin-Madison offered him joint position in the History and the Department of Religious Studies as part of a cluster-hire, he accepted it. He remained at Wisconsin until 2010 when he retired as Professor Emeritus.

While known for his publications such as The Mongols, which long served as the standard textbook as well as introduction for many of the reading public to the Mongols, as well as Medieval Persia, David was an exceptional teacher. Always a proud Welshman (his house in Madison, WI was identifiable by the Welsh flag) he did, however, have appeared to have acquired the particularly English habit of self-deprecation and exaggerated humility, despite his obvious and formidable contributions to Mongolian and Iranian history. He was a natural story-teller, who knew how to draw students into a subject. He often used experiences from his own education to enliven discussion of dry topics. For example, while discussing the impenetrably ornate and funky prose stylings of Wassaf, he recalled his days studying Persian at the feet of A.K.S. (Nancy) Lambton, when he and his fellow students sketched out plans for a commemorative necktie, patterned with the motif of a blood-dripping quill. When students stumbled through their translations, he was fond of putting them at ease by saying he was Nancy Lambton’s second-worst student: the worst, naturally, was a future British ambassador to Iran.

As a mentor, his ability to say that he no longer agreed with some of his earlier conclusions demonstrated the ability to be open minded and conduct self-reflection about one’s own writings. He never viewed history as an absolute and fixed interpretation and sometimes no longer agreed with something he wrote in the past. That being said, he did enjoy the bemusement of undergraduate students when he would tell them “The Historian Morgan is quite wrong on this point”.  He also sought ways to make sure students appreciated the importance of history in order to understand the present.  After the events of 9/11 and the subsequent U. S. invasion of Afghanistan, he became a frequent commentator for the events due to his own extensive knowledge of Afghanistan (which he visited shortly before the Soviet invasion), and knowledge of Islam. Due to result of his extensive preparation for these interviews, he developed a graduate course on Afghanistan which covered the country’s history from Alexander the Great to the Taliban.  On the first day of class he told his students “Since I’m doing the reading, I thought it might be nice to have someone to discuss it with”. It was in seminars such as this that he really shined as a teacher. Whether on Afghanistan or a seminar on Marco Polo, he expertly guided students in discussions of historiography and evaluating sources and gave of his time unstintingly to assist the study of others. He particularly preferred smaller classes that could fit in his office or even one on one tutorials in his book-lined study at his home where he might guide students through readings of Rashid al-Din or Marco Polo. Discussions became conversations allowing students to have the confidence to explore their ideas.

While his students will always fondly remember him for his teaching, one must never forget his standing as a scholar and public figure.  The Mongols was one of the first true studies of the Mongols that went beyond narrative that was also accessible to the public. David’s writing style with its subtle insertion of humor made his scholarship appealing not only to scholars but also students and the general public. This is apparent as it underwent 30 printings in English and also saw translations in six languages, including Mongolian and, of course, the obligatory unauthorized Persian translation. His Medieval Persia, 1040-1797, underwent two editions approximately 10 translations along with an unauthorized Persian translation. His expertise made him a sought after consultant for documentaries and other shows as well such as The Storm form the East.   In addition, he edited seven volumes, including most recently volume 3 of the The New Cambridge History of Iran. While he also wrote numerous articles, which remain essential reading for the study of the Mongol Empire, he was truly the padishah of an intellectual empire as the editor of the Journal of the Royal Asiatic Society (1998-1999), which he helped transformed from an antiquarian journal into the robust scholarly publication that it is today, and also as the editor of the prestigious Cambridge Studies in Islamic Civilization series. Under his guidance, the series included volumes on all aspects of the Islamic world, including some that at first glance did not seem obvious, such as the Mongols. David was in the vanguard of those scholars who looked at the broader implications of Islamic civilization rather than more narrow geographical descriptions. Furthermore, while publishers invariably approached him for books, he never hesitated to recommend one of his former students for the task, thus providing them an avenue to publication. Thanks to his guidance, numerous scholars had their first publications, helping them establish their careers.

The eminent scholar, Peter Jackson (University of Keele), David’s best friend for decades, once said that on 30 April 1945, Adolf Hitler committed suicide shortly after David’s birth.  The genial and compassionate Welshman’s sudden appearance being the last straw for the Nazi leader. Indeed, David was indefatigably kind and amiable to all whom he met from respected colleagues to callow undergraduates. His example is one that all historians and scholars should emulate, not only as academics but also as human beings. An admitted bibliophile, David’s homes in Wisconsin and outside of London as well as his university office contained an impressive collection of books—in both homes, the shelves were designed specifically to avoid sagging under the voluminous weight of books. Yet, books were not his love.  Had the academic career panned out, David may have become a conductor as demonstrated by his love of classical music, which included an impressive display of recordings in various forms. A guest at his home would invariably find themselves enjoying a gin and tonic while the strains of a symphony or concerto played in the background, audible but not drowning out some historical discussion of history or the merits of this or that interpretation of Bach’s compositions.

He is survived by his wife Johanna, daughters Judith, Rosalind, and Eleanor as well as a grandson Owen from Judith and son-in-law, Patrick, and, of course, Charlie the cat, a devoted companion and critic.

The funeral service will be held 13 November 2019 at the Baptist Church on Akeman Street, Tring, United Kingdom.