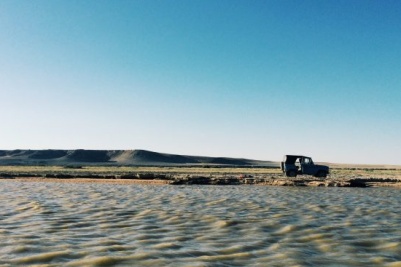 A new post is up at The CESS Blog by Grace H. Zhou of Stanford University, Shifting Seas: The Lived Landscapes of Aral:

Stihia Festival promised to be the Burning Man of Central Asia. On September 14, hundreds of revelers gathered in Moynaq, a once bustling port at the edge of the brimming Aral Sea, but now a dusty town in the Karakalpak autonomous region of northwestern Uzbekistan. Festival goers arrived from cities across Uzbekistan and other parts of Central Asia, Europe, and the US, hoping to rave to techno sets mixed by DJs from Tashkent, Moscow, Tbilisi, and Berlin. Media reports soon followed, describing the spectacle: the desolate landscape of a former sea-bed-turned-desert; electro-music as rain-song to call back the sea or, at least, to raise environmental awareness; the hundreds of curious locals who showed up to observe the festivities.

There’s something captivating about the desiccation of the Aral Sea. The ability of the festival to attract international attention taps into a dystopian imagination of environmental catastrophe. Haunting photographs of Aral’s “graveyard of ships” have been circulating on the internet for years, drawing visitors to the site from around the world. These proliferating images of the hulking carcasses of Soviet-era trawlers that now sit stranded and rusted in sand, with no water in sight, provide a striking picture of ecological ruin. Aral seems to portend disastrous futures for places elsewhere threatened by anthropogenic climactic changes. It is a dire representation of life in the Anthropocene era, one that captures both morbid fascination with an ecological doomsday scenario and serves as a warning, a rallying cry to action.