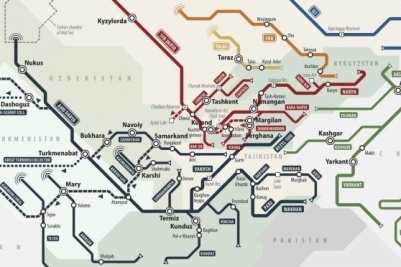 A new post is up at The CESS Blog by Patryk Reed of the University of Pittsburgh, The Central Eurasianist Current of the 2018 Modern Rivers of Eurasia Symposium:

A growing current within Central Eurasian Studies covers water—and for good reason. Scholarly analysis of human-water relationships in such areas as history, culture, and political economy can produce new understandings of the past and the present.  Since ancient times, communities of this region have survived by successfully locating and distributing aquatic resources. Today, this task involves higher stakes than ever: local governments’ continuous mismanagement of rivers over the last century caused the Aral Sea to shrink by 90 percent, along with other untold lesser-known harms; now, climate change and mining are doing away with the very glaciers sustaining Central Eurasia’s precious waterways.

Rivers are the centerpiece of this fragile context. It is why rivers feature so prominently in studies of Central Eurasia. Experts on the region are well positioned to lead a growing, international body of scholarship on water-society relationships that has urgent global relevance.

Central Eurasia specialists formed the largest subregional cluster at the Modern Rivers of Eurasia symposium held at the University of Pittsburgh in February 2018. The event brought together an international group of sixteen scholars to consider human-river relationships in sessions ranging from keynote lectures, conversations about pedagogy, and discussions of works in-progress. (Notably, the University of Pittsburgh is also now home to the Water in Central Asiacurriculum project, funded by a Humanities Connections Grant from the National Endowment for the Humanities.)